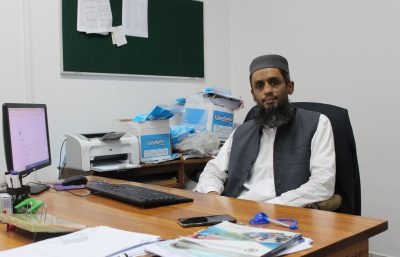 Dr. Ahmar enjoys about Nineteen years of industrial as well as research and development experience. His professional experiences include preparing functional specifications, designing and implementing software for financial applications, as well as diagnosis, troubleshooting and resolution of customer’s technical issues.
His core research work inlcudes the performance analysis of optimization algorithms for static as well as dynamic image reconstruction using electrical impedance tomography (EIT) with application in industrial process monitoring and medical imaging. His PhD thesis was on the application of oppositional biogeography-based optimization, which is one of the most recently developed evolutionary algorithms, to solve the boundary estimation problems using EIT. The specific problem solved was that of the estimation of the size and location of the human heart, while a patient is told to hold his/her breadth.
More recently, he has developed research interests in the area of aerial vision and swarm robotics. As an in-charge of Aerial Robotics Lab, he is working towards devlopment of novel algorithms to induce intelligence in teams of autonomous flying robots, with applications in survielance and monitoring, precision agriculture, aerial mapping, target tracking and analysis, etc.

In collaboration with other colleagues, much of his research work has been published in international journals of hugh repute.

His research interests include
Machine Learning and Robotic Vision : Dynamic path planning, dynamic target tracking, probabilistic localization and applications of of machine learning algorithms in the field of computer vision and robotics.
Evolutionary algorithms (EAs): Application and analysis of EAs to solve the static as well as dynamic optimization problems.
Electrical Impedance Tomography: Electrical impedance tomography (EIT) is a non-invasive impedance imaging modality which has been actively studied for its industrial as well as medical applications. The research focus is on dynamic target tracking as well as localization of anomalies in EIT medical images.
BioInformatics : Design and implementation of novel algorithms and techniques in the field of genomics, addressing problems such as finding hidden messages in the DNA, the genome assembly and the genome sequence alignment problems.

Funded Projects
Target Tracking From Up Above the Sky

Role: PI
Funding Body: HEC NRPU
Duration: Two Years (2019 – 2020)
Total Budget : About Rs. 2.6 M
Project Summary : The use of surveillance cameras to monitor and track target(s) is currently an active area of research, with civil as well as in military applications. The conventional surveillance mechanisms, such as, pre-installed CCTV cameras, are static in nature and lack the capability to robustly monitor and track dynamic target(s) in a timely manner. In contrast, the unmanned aerial vehicles (UAVs), usually equipped with cameras and other sensors, adapt to fast changing environments in real-time with an accelerated search capability, and offer a superior target tracking and monitoring, resulting in a much more reliable and robust surveillance system. The proposed research work seeks to design and implement intelligent algorithms in the domain of cooperative aerial camera networks for surveillance and monitoring of moving targets. The general focus of the research work is to build up robust coordination and planning mechanisms to monitor and track following types of targets: 1) Isolated targets, e.g., using aerial cameras tp to track and monitor criminal targets, such as, suspicious vehicles moving on highways. 2) Targets in a cluttered environment, such as, human target(s) moving in the crowds or suspicious vehicles moving in heavy traffic.

International Collaborations and MOUs
Active Collaboration with Huawei for the curriclum development of BS in Aritfical Intelligence. As Dean FCSE, lead the initiative for the GIK-Huawei Partnership for BS –AI program.
Focal Person for the MOU with Kumnoh Institue of Technology (KIT), Korea for student and faculty exchange between KIT and GIK Institute.
Focal Person for MOU between GIK Institute and Sawayra Inc., a US-based humanitarian organization working in the areas of renewable energy, water, waste disposal and recycling, etc.
Prominent role in drafting and signing an MOU with University of Missouri, Kansas City (UMKC), USA for student and faculty exchange between UMKC and GIK Institute.

Ask Leprechaun, an FYP supervised by Dr. Ahmar Rashid, was the 2nd Runner-up at National Championship of NGIRI (Ignite).

Invited Talk on “Emerging trends in IT and Challenges to Pakistan’s HR Development (Perspective of Academia)”, during the national seminar on “HR and Connectivity Development For IT Sector: Challenges and Way Forward, held on September 9, 2020, at Institute for Strategic Studies Research and Analysis (ISSRA), National Defence University (NDU), Islamabad.