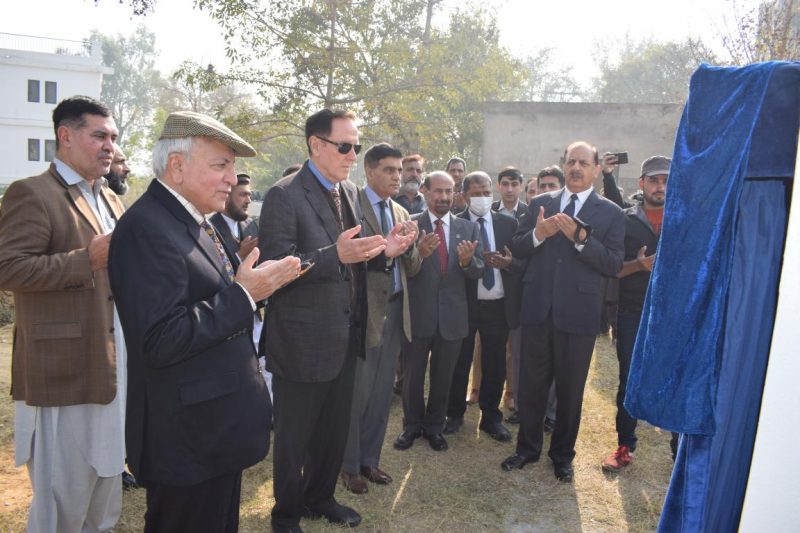 Dr. Fazal A. Khalid, SI, Rector GIK Institute briefed the delegation about various activities and projects of the Institute. The delegation was apprised about the new programs started and those planned for the future which include the Cyber Security, Software Engineering, Hybrid Graduate Programs, MS, and PhD in Civil Engineering Department.

The Acting President was also informed about the ongoing infrastructure projects including construction of a new girl’s hostel, accommodation for faculty members and other employees, development of innovative labs and 1 MW solar power project. The Acting President expressed deep interest in such projects and advised the Institute to continue constructing the buildings and other welfare projects for the employees of the Institute who are making huge contribution in providing top quality education to the students belonging to various parts of the country as Center of Excellence in the fields of engineering sciences and technology. The faculty members explained the salient features of different programs and the plans for starting innovative subjects being a technology university.

Earlier, the Rector welcomed Mr. Salim Saifullah Khan and expressed his gratitude for visiting GIK Institute as Acting President and Executive Director SOPREST and providing guidance to the Institute for outstanding contribution to the Society in education. The Acting President paid tributes to late Ghulam Ishaq Khan and his team for establishing an engineering and technology marvel in a rural area for assisting the government in economic development of the country by producing quality HR. the Acting President SOPREST also eulogized the contribution made by his predecessor late Mr. Farid Rahman towards growth of SOPREST and GIK Institute. The Acting President reposed its confidence in the faculty and the management of the Institute and made commitment to provide all sort of assistance for transforming GIK Institute into a modern and innovative higher education institution in emerging sciences and technology. Mr. Shakil Durrani advised to introduce innovative programs and improvement in the lab and other facilities for the assistance of the students for which adequate financial support will be provided by SOPREST. GIK Institute is a premier institution and is famous for the quality education at national as well as international levels. The Institute has produced six thousand five hundred engineers so far who are working in different parts of the world and more than three hundred graduates including US Silicon Valley alone.